The Arches in July 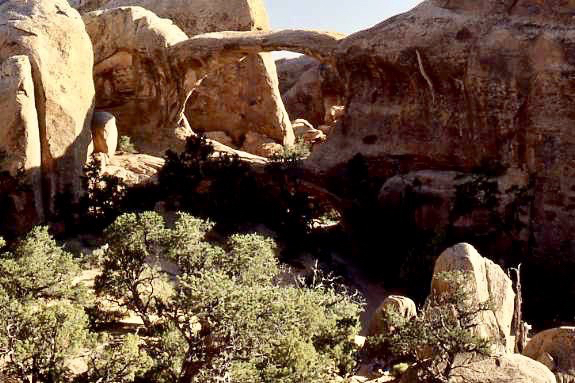 The best hikes bring you closer to nature. In the 1980’s we hiked and camped at the Arches National Park in Utah. It was the week of the  4th of July, and the heat was oppressive. Temperatures stayed in the high 90s during the day, but at night the temperature would fall into the low 50s.

Our six-month-old traveled on our backs, as my husband and I took turns with his added weight. The baby was still nursing, so food wasn’t an issue. Packing out the diapers was a smelly and bulky issue.  As we used up the water we carried, the weight was replaced by dirty diapers. At least we didn’t have to haul both at the same time.

The views were magnificent. Delicate Arch, the iconic Arches photo, was worth seeing, but other destinations grabbed my attention. Walking between the Cedar Mesa Sandstone with its multicolored banded spires was a visual reminder that humans, with our short life spans, are merely passing through this world. Hiking into a valley, like Squaw Flat, revealed a wide range of juniper and pinon trees, as well as shrubs and grasses. The plant life adds a touch of green against the yellows, oranges, and reds of the sandstone. Some trails tricked the mind into thinking no other human had ever been there until I saw the pictograms.  While documentaries provide the look of the park, they fail to provide the smell of the land and the feel of a breeze atop an arch.

At first, I thought the area devoid of life, but closer inspection revealed red-tailed hawks, scrub jays, pinon mice, and, of course, insects. Though I know coyote and big-horn sheep reside there, they remained hidden from view the entire week.

Amidst the grandeur of the many arches, natural bridges, and towers, I found myself humbled that I was able to visit such a place. The peace I felt in the Arches I have never experienced anywhere else. It was as if my family was alone in the universe with only the stars to bear witness to our journey. There were no lights to interfere with the incredible view of the night sky, and silence lent a reverence to the trail. Standing atop an arch revealed a three-hundred and sixty-degree view with no manmade structures in sight.

Unless we were hiking to a significant point of interest, we rarely saw another person on the trail. In a place like this, how could I not take a moment to thank God for the landscape and for the opportunity to visit? The joy I felt in that place has not diminished through the years.

My one regret is that I didn’t take many pictures of the trip. Digital photography was not yet available, and a roll of film provided twelve or twenty-four pictures. The film roll had to be purchased and loaded into the camera. After finishing the roll, it had to be developed and paid for before viewing.