Red, the Wolf, and the Huntsman 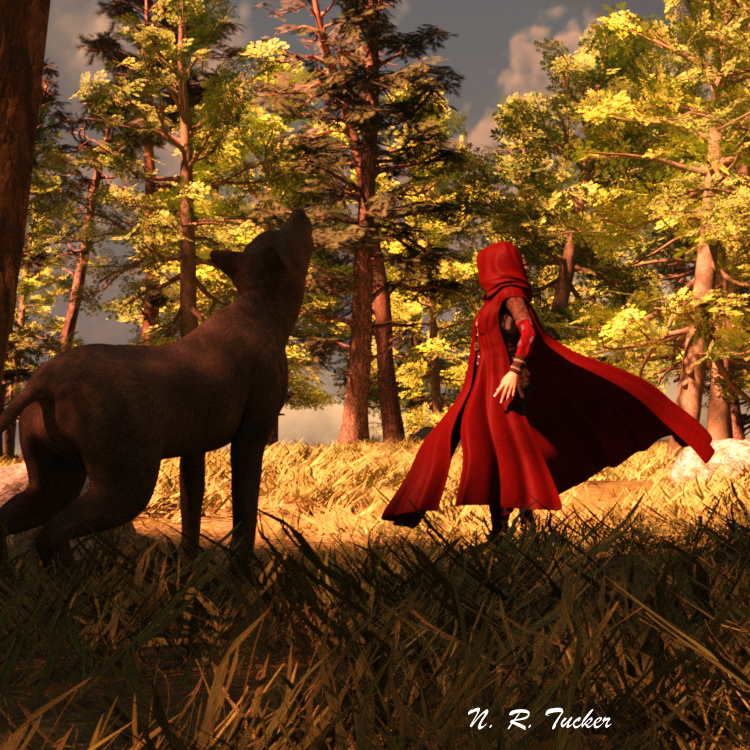 This flash fiction takes place in the Fifth Century. There are no Farseen Chronicles plot spoilers in this story.

Pleasance looked up from her sewing, “I promised Father I would mend this before he returns.”

“Since neither of us are moon called, we have no need to heed the call,” Lea retorted without looking up.

Zeal threw open the door, “Do my sisters desire a run with the moon this evening?”

“I do,” Wisdom smiled, “But Pleasance would rather sit in this stuffy house.”

Tempest pushed Zeal aside and trudged inside; both she and her weapons were bloody. Claiming the stool at the hearth she proceeded to clean her weapons. “I tire of killing foolish shifters who think to make a name for themselves by killing me.”

“Anyone so foolish is better off dead.” Zeal moved toward the door. “Do you wish to accompany us into the woods for the full moon?”

Tempest glowered at her youngest brother.

“I didn’t think so,” he nudged Wisdom out the door.

Once they were away from the house, Wisdom slapped Zeal on the arm. “You know better than to goad Tempest when she’s in a mood.”

“She’s always in a mood, but she’s never killed a sibling.”

“Yet. If any of us were to break shifter law she would.”

Wisdom’s cloak billowed around her as the wind picked up. “Come, brother mine, the woods await.” She ran into the forest, her red cloak trailing behind her. Zeal shifted and ran beside her, his black wolf fur a contrast to her bright cloak. They moved through the trees with ease. When he smelled the huntsman, Zeal cut left into some bushes. Wisdom slowed to a walk, wishing she had shifted before the huntsman approached.

“Well now, lass. What be you running from? Mayhaps I can help?”

Wisdom pressed her lips together. He didn’t want to help her. Though his words were acceptable, his tone was offensive, and he called her lass. “I was running for fun, headed home.”

“Were you now?” The burly man raised a huge hand and rubbed his chin. “Then you be lost. A daughter of that witch the villagers talk about you be, and her home be in the clearing behind you.”

“My Mama is no witch,” she replied passionately. The humans in the nearby village thought Rayna was a witch because she grew herbs and helped those in need of remedies for minor ailments. She even set bones. While the villagers sought her help when needed, they feared her.

“Convince me,” the huntsman drawled. “You be a pretty one with hair the color of straw and eyes the color of the sky.”

She tilted her head. She had not expected the rough huntsman to speak thus. “Your words surprise me.”

The huntsman laughed, showing teeth too white for one his age. The rest of his glamor slipped away, leaving a tall, muscled, fae.

Wisdom took a step forward. She had never seen a fae before, unless she counted Tempest and Clarity, her half-breed sisters. His features were pleasing.

When she stepped forward, the huntsman leaned in and grabbed her. Wisdom fought but she was no match for his strength. He held her easily and her feeble attempts to escape were useless. From her left, the black wolf lunged. The fae called wind and threw the wolf into a tree.

“Zeal!” Wisdom watched in horror as her brother slid to the forest floor.

“Come with me and I won’t kill him.” The huntsman dropped his uneducated speech.

Remembering what Tempest had told her of the fae, she said, “If I come with you, neither you, nor your companions, will harm him or cause him to be harmed.”

A slow smile spread across his face. “Yes, my prize. Neither I, not my companions will cause harm to the shifter wolf as long as you come with me peacefully. The deal is struck with no out clause.”

She expected him to open a way to the Farseen but he walked back down the path. She followed. She saw three fae tracking them but there were probably more.

A blur of black fur jumped past her and embedded jaws in the thigh of the fae. When the others rushed to help their leader, she pushed wind, blowing them back into the forest, never taking her eyes off the fight. The huntsman was experienced and sure of his moves. The wolf was all fury and had never killed another sentient. The fae would win. She stepped forward to help when a gentle hand stopped her.

Tempest’s calm voice was a relief, but she was wrong. “No, he’s hurt.”

Tempest chuckled, “True, but the fae is dead.”

Wisdom twirled around just as Zeal clamped his jaws into the fae’s neck. The resulting snap was sickening. Wisdom dropped to her knees when Zeal approached. He limped over without putting any weight on his left front paw.

Tempe smiled, “You fought well, but perhaps next time Wisdom will ask for help before you have to fight alone. Had the fae not dropped his glamour I wouldn’t have noticed his arrival. I killed his companions.”

“Ask for…” Wisdom groaned. She should send a message directly into the minds of her alpha sisters. Zeal, like most alpha males, did not have that ability. She turned and followed the others to the house. Next time she would be ready. Next time Zeal would not fight alone.