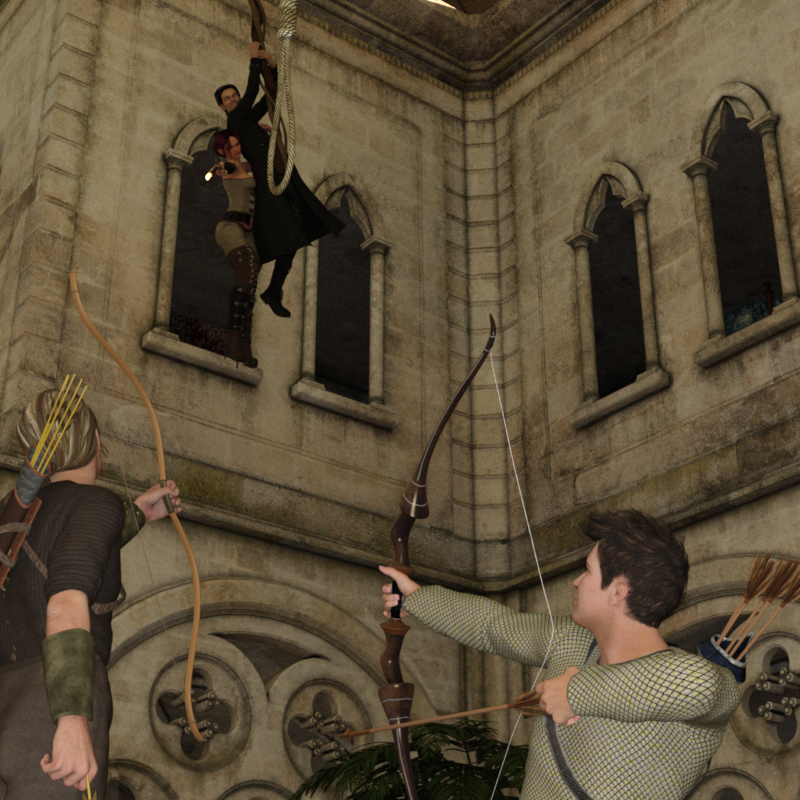 “It was. Now it’s a view of the gallows they’re building for you,” Cambree retorted, massaging her temple in a vain attempt to stop her headache.

“Don’t call me Cam!” Only Papa had called her Cam. No way would Cambree allow this outlaw to address her using that endearment. How had she ended up in this mess? Cambree glared at Uriel. His grin highlighted near perfect features, marred only by a small scar on his chin. His short hair seemed to lie straight back on its own. Ah, yes. She was a fool, beguiled by the type of man her father warned her about. Cambree couldn’t believe she had trusted Uriel.

Uriel’s rescue attempt had given Cambree’s uncle an excuse to take over her holdings. Uriel would hang; she would be banished. Cambree had never been off the island. Papa had ruled here since before she was born. Until he died last week, she had never known a moment’s fear. Since then, Cambree had known nothing but.

“Time to go,” Uriel said, pulling her out of her thoughts.

Cambree scoffed, “This may look like a nice place to live, and it used to be, but now Uncle Trevor has guards posted at every turn.”

“I arrived too late to help your father, but I’ll get you to safety. Come Cambree, I have a plan.” Uriel held out his hand.

Cambree moved toward Uriel only because she didn’t have a plan, and a plan was needed at this point. He circled her waist with his arm and led Cambree toward the smaller, side balcony.

“I can’t climb down that! It’s three stories,” she exclaimed, then gasped when Uriel pulled her tight against his chest, lifting Cambree easily with one arm, and opening the door.

Did he just call her darling? Before Cambree could object to his insolence, he jumped, and grabbed a rope hanging from a dirigible.

When the first arrow flew by, narrowly missing her shoulder, her grip loosened and she slipped. She grabbed blindly and found she was now hugging Uriel’s waist.

“Darlin’,” he grunted, without slowing their ascent. “As long as you’re there, get the pistol out of the left pouch and shoot back.”

Pistol! He has a pistol? Of course, he does. He’s an outlaw.

Keeping one hand secured around his waist and her legs wrapped around his, Cambree found the pistol and fired in the general direction of the men shooting arrows their way. The bullet hit the ground and sent debris flying into the air, but everyone scattered and the arrows stopped.

Once they were in the boat, Uriel took the controls, and they flew away.

“Where’s the crew?” she asked.

“Darlin’, I would never risk my crew on a personal mission. The boat was programmed. We’re well above weapons range now, even from your uncle’s fleet.”

Uriel laughed as he swept her into his arms and kissed her. Not the peck on the cheek Cambree received by those who courted her for political gain, a real kiss. At first, her body tensed, but as the kiss deepened, she became lost in the moment. When Cambree regained her senses, she pushed him away. “Why did you kiss me?”

“Darlin’, I wanted to kiss you the first time I saw you,” Uriel grinned.

She could see the mainland in the distance and, suddenly concerned with the future, Cambree asked, “Where are you taking me?”

“Your grandmother?” Cambree frowned. What type of outlaw takes the girl he just kidnapped to his grandmother?