This flash fiction takes place toward the end of Enthralled (Farseen Chronicles Book 2).

“Why do some of your merfolk have legs? And why do some of those with legs have fins and others have toes?” Seven-year-old Mia looked up in surprise. She was paging through Star’s sketchbook. She loved looking at all the creatures from the Farseen. One day she would go there. She would be a great explorer and have wonderful adventures and perhaps Fae bards would write songs about her.

“You don’t know about river merfolk and sea merfolk?” Star asked in surprise.

Mia shook her head no, as did her brothers Mitch and Michael.

Joey looked up from his laptop, “There’s more than one type of merfolk?”

“Then you should explain,” Joey smiled, email to his mother forgotten. 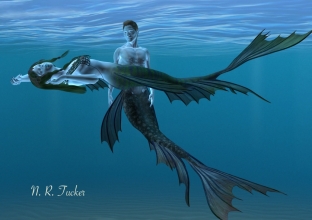 Star sighed. Anytime the shifters found out something new about the Farseen she was
expected to go into teacher mode. There seemed to be a lot of misinformation between the two dimensions. She held out her hand and Mia handed her the sketchbook. She opened the book to a sketch of sea merfolk, the one with the single, large tail fin the Seen seemed to expect, and showed it to the room.

“It is said that back before recorded time, merfolk lived only in the Zorlan Sea, the largest body of water in the Farseen. One day, a curious merchild left the sea and swam up the large Soul River. She swam past the Southern Realm and the Eastern Ream but was unable to pass Psyche Falls for it was too high for her to jump. Her desire to see more was overwhelming but there was nothing she could do. Although she could breathe in or out of the water, her tail fin would not allow her to move out of the water. Sad, she returned home.

“She told others of her grand adventure and eventually other children swam up Soul River with her and all agreed it was lovely. They played with the hippocampus in the deep waters of the Soul River but many wanted to move to the rivers above the falls. Both the Kaveri and Psyche Rivers are blocked from the Zorlan Sea by waterfalls.

“As time went on some of the merfolk children spent more and more time in the river and less and less time in the sea. Their parents warned them of dangers but the children were happy with their exploration. Since they hadn’t seen any danger, the children thought their parents were exaggerating. The adults didn’t explain themselves properly, which happens sometimes when adults are talking to children.”

Star turned to a sketch of two types of river merfolk playing with hippocampi. Flipping the picture for the others to see, she pointed at the ones with legs and fins, “The danger wasn’t from an attack. The danger was biological and magical. The merfolk environment determines their appearance. Since rivers are smaller than seas, the children quit growing. Eventually, their bottom fin split and webbed leg fins replaced their single tail fin. Their hands grew into smaller fins to make up for the loss of power from the single large tail fin.”

Star pointed to the smaller merfolk, “As the river merfolk scaled the waterfalls and took up residence in the smaller Kaveri and Psyche Rivers, they grew smaller in size and their webbed fins became toes and fingers with froglike digits useful for grabbing things. Both types of river merfolk could climb the waterfalls and explore all of the rivers. The northern merfolk spend as much time out of the water as they do in, though most prefer to sleep underwater.

“When the river merfolk, now adults in age but still of childlike size, returned to the sea for a visit they were shunned by their kinfolk in the sea. Their froglike appendages were not nearly as useful in the sea and they were sluggish in the water. Even those with four flippers were not as fast in the open sea. They also found the smaller size made them more tempting food for sea predators. The river merfolk returned to their rivers. It is rare that you see one close to the mouth of the Soul River, and even more rare that they venture into the sea.

“Even today, when you meet merfolk, you will notice that the ocean merfolk are serious, immersed in rules and protocol. They are larger – head to tail – than those of us who walk on two legs, while the river merfolk are around five feet tall, fun loving and carefree.”

Mia pursed her lips and asked, “Could they return to the sea and grow and get their single tail fin back?”

“Yes, but it takes time for such a change to happen and they would be in grave danger from the larger creatures of the sea because the sea merfolk will not allow them into the safety of their pods.” Star closed the sketchbook and handed it back to Mia, “Besides, they like living in the rivers.”

Mia opened the sketchbook again and looked at the three types of merfolk. One day she would travel to the Farseen and learn from all of the interesting creatures there.